"2XU constantly brings innovations in triathlon to the market. The highly technical products are the best available on the market." These words come from none other than Jan Frodeno - the only person in the world to ever win both a gold medal at the Olympic Triathlon Games and the Ironman in Hawaii. The hymn of praise of the native of Cologne does not come from nothing: 2XU is the absolute non plus ultra when it comes to compression clothing for sports. 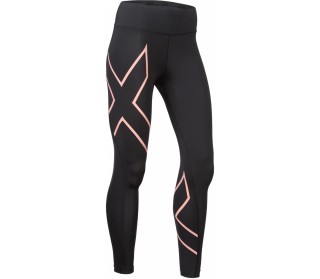 The story of 2XU, short for "Two Times You", began like many stories of successful sporting goods manufacturers: New Zealand professional triathlete Jamie Hunt was tired of the previously available products he wore in his sweaty job. Equipped with years of sporting expertise, he decided without further ado to launch his own label. A brand that was to set new standards, create innovative products that did not yet exist in this form. Together with his good friend Aidan Clarke, he made an appearance with underwear guru Clyde Davenport. The unconventional concept of the two convinced the Australian immediately.

"To be successful in the global marketplace, you have to find a niche and eventually own that niche," Hunt said in an interview with the Sydney Morning Herald, referring to his idea. But what was that niche that Hunt and his two partners were pushing into? The answer is as simple as it is ingenious: compression garments for sports that promote maximum performance and minimize the subsequent recovery time. In 2005 Hunt and Clarke moved with their families from New Zealand to neighbouring Australia to make their dream come true. The official birth of 2XU.

When you think of sportswear, brands like adidas, Puma or Nike automatically appear in your mind's eye. Two traditional German companies with a long history and a US-American label, which advanced to the absolute market leader within almost 50 years. Knowing that these global brands could not be achieved, 2 XU took a different path. "We didn't want to set up just another sports goods company, that was clear to us from the very beginning," said founder Hunt at 9Finance and added: "We knew that we couldn't compete with the big boys like Nike or adidas, their marketing budget was just too big for that.

That's why we have decided on high-end products and concentrated on pure high-performance clothing. Thereby 2XU profited from the spirit of the times. In 2005, Australia was one of the first countries in the world where the demand for compression garments for sports activities grew rapidly, Hunt revealed. "In our second year we were already the biggest triathlon brand in the world, after that it was only steeper uphill." Hunt and Co. were on the right track, and today their company generates annual sales of around 100 million euros. And rising.

THE 2XU SHOP AT KELLER SPORTS

Do you want to see for yourself the numerous advantages of compression garments? No problem, the 2XU Shop at Keller Sports has a lot of premium products for you. The Bonded Mid-Rise Compression running trousers for men, for example, come in the typical 2XU design: simple, black and with the striking X company logo. The running trousers were produced especially for agile activities, their fit avoids restrictions in freedom of movement. The materials used by 2XU ensure reduced muscle fatigue and pain in equal measure.

The risk of overload injuries is also minimized. Naturally the fabric has an antibacterial and breathable effect. Keller Sports also has the right pants for women in the 2XU store: The Print Mid-Rise shines with its chic design in addition to its compression support for better protection of the leg muscles. In the wide waistband you will also find sufficient storage space. Both running pants are often available at 2XU dealer Keller Sports at attractive prices in 2XU Sale.

What could be better for a label than to constantly appear in connection with the biggest stars? Hardly anything. 2XU has managed in its only 14 years of history that some of the most famous athletes in the world swear by the products of the Australians. Basketball icon LeBron James is also equipped with 2XU items, as is his colleague Stephen Curry. Several other basketball and football professionals also wear 2XU products. But it's not just athletes who appear in 2XU compression clothing, hip hop legend Kanye West also works closely with the up-and-coming label. Even actor Hugh Jackman or the Australian politician Julie Bishop have been seen and photographed with 2XU products.

2XU: A PROTECTIVE SHIELD FOR YOUR MUSCLES

With 2XU the functionality is of course the main focus. This means: The targeted compression of selected muscle parts optimally supports your blood circulation. The running wear for women and men supports the front and rear thigh muscles, gluteal muscles and adductors. The advantage of this is that the muscles warm up faster before you run. During your workout, the innovative fabric, which includes GWX Flex yarns, acts as a protective shield for your muscles and tendons. An antibacterial treatment of the fibres also prevents unpleasant odours and thanks to the reflective logo inserts, you'll also be ready for your run at night with 2XU.