From protective clothing for motorcyclists to ski protectors. For the Dainese brand, your safety is the absolute focus. Specializing in light but robust protectors, Dainese has earned a solid foothold in the market for many years. If you are always on and off the slopes at high speed, protect yourself and your back. Here you can find our assortment of Dainese articles.

From protective clothing for motorcyclists to ski protectors. For the Dainese brand, your safety is the absolute focus. 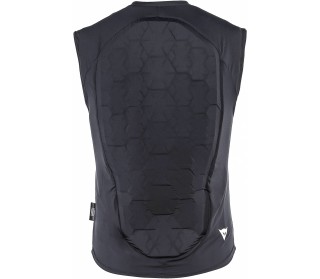 A trip to England at the end of the 1960s led company founder Lino Dainese to design protective clothing for motorcyclists. The 20-year-old is travelling to the United Kingdom on a Vespa with his buddies. On this journey he comes into contact with powerful motorcycles for the first time and he notices them: The drivers wear leather suits for their safety. Back in Italy, he began to design and produce his own motorcycle clothing. 1972 Dainese founds his company of the same name and takes off directly. Just two years later, he signed his first supplier contract with a World Championship rider (the German world champion Dieter Braun) and further developed his motorcycle clothing with elastic inserts for more wearing comfort.

In 1979 the next safety-relevant innovation follows: Dainese launches the world's first back protector, which is soon also produced for hobby riders. In the mid-1990s the Italians consequently focused on other sports. With the foundation of the internal department "No Impact", the know-how from the motorcycle sector is to be transferred to the mountain bike and winter sports sector, above all to ski sports: At the 1994 World Ski Championships, back protectors are used for the first time in winter sports. Also in the new sports Dainese relies again on the cooperation with top athletes (among others MTB world champion Shaun Palmer) and further innovations and premieres follow: The first airbag for motorcyclists is presented and Dainese develops his first ski helmet in cooperation with ski world champion Lasse Kjus.

DAINESE PRODUCTS: THE DEVIL IS IN DESIGN

Whether back protector, airbag or helmet and regardless of the type of sport: the logo is a fixed design element at Dainese in addition to the lettering. The stylized devil's head symbolizes a "tempo demon" and is supposed to symbolize dynamics and rebellion. Right from the start, the eye-catching design of the collections also caused a stir. At a time when black was the typical colour of motorcycle clothing, the first models from northern Italy were already colourful leather trousers for cross-country and road riders. The bold and trendy play of colours becomes more and more a concept, as a tattoo collection comes onto the market. Today, the manufacturer's homepage offers its own configurator, so that the customer himself can have a say in the design of his station wagon. But there are always two elements: devil's head and Dainese lettering.

Dainese started out as a manufacturer of innovative safety solutions for motorcyclists, but thanks to the targeted transfer of knowledge it subsequently also ensured greater safety in other sports. Safety has long been neglected, especially in fast and dynamic skiing, which was a thorn in the side of founder Lino Dainese. With his products he now brings top athletes and hobby skiers on skis or snowboards safely down: In the Dainese online shop at KELLER SPORTS you will therefore find the latest back protectors and protector vests for optimum protection when skiing and snowboarding - and many other Dainese offers for beginners and professionals.

ON THE ROAD WITHOUT BORDERS: WITH DAINESE-EXPERTISE INTO SPACE

Motorcycling, alpine skiing, biking and even in space - wherever protectors are needed, the products of the Italians are not far away. Among the most famous Dainese athletes are without a doubt Valentino Rossi, one of the most successful motorcyclists in history with nine world championship titles, and double Olympic champion Matthias Mayer (alpine skiing). At sea Dainese cooperates with the Emirates Team New Zealand.

The world-famous New Zealand sailing team was equipped with safety products from Dainese during its triumph at the America's Cup in 2017, among other things. Sea-Guard is the name of the world's first safety equipment specially designed for sailors and used for the first time. Furthermore, the astronauts Andreas Mogensen from Denmark and Thomas Pesquet from France relied on the expertise of the Italians for their respective missions in space and thus returned safely to Earth.

Dainese invests a great deal in research and brings in the experience of external companies in order to meet its customers' expectations and offer them the best possible protection in their sport. Among other things, the Italians have been operating their own technology centre for research and development, D-Tec, since the 1990s. Dainese also works with the Massachusetts Institute of Technology and NASA to develop innovative protector solutions such as Flexagon technology. And with the takeover of the Italian helmet manufacturer AGV, Lino Dainese was finally able to realize his dream of "protection from head to toe".