Legends shaped Dunlop's way through the tennis scene. From Rod Laver to Amelie Mauresmo, Steffi Graf, John McEnroe and Patrick Rafter, some of the sport's greatest personalities have swung to success using Dunlop racquets. When he stormed to the finals in Wimbledon 2018, Kevin Anderson almost joined the ranks, but lost there to Novak Djokovic. Dunlop shaped and continues to shape the tennis circuit, developing his racquets and balls for pros and allowing you to benefit from the latest technology. Experience more! 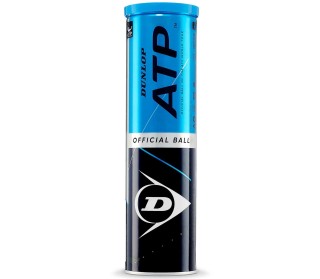 DUNLOP: THE WAY FROM THE BIKE TIRE TO THE BALL TO THE RACKET

Not that it was absolutely necessary. The public already knew the profitable rackets of Dunlop. So John McEnroe didn't have to use his racket to clear beverage cups and stubbornly work the floor to express his anger. Nevertheless, he did it regularly and painted a symbol with it. The racket in the center. Dunlop in focus. The US-American and his not always relaxed temperament won seven Grand Slam tournament in total and contributed to Dunlop's outcome.

In the end, no other racket manufacturer helped its athletes to more Grand Slam victories than the English Brand. In Birmingham in the early 20th century, nobody had thought of tennis rackets. In 1910, a company that initially specialized in rubber goods and developed the first air-filled bicycle tires had become a manufacturer of rubber golf balls. The yellow felt ball followed in 1924. And when the company bought the tennis racket manufacturer FA Davis one year later, it was finally clear that Dunlop would also establish itself in tennis.

A FLYING D FOR THE TOP OF THE TENNIS WORLD

Dunlop had the necessary expertise, produced new types of sports equipment and thus influenced several sports at the same time. Nevertheless, something was missing. Six letters, nice and good, but even better they come in combination with a distinctive logo; a logo that depicts the dynamics of flying balls and swinging rackets without being too artificial. So Dunlop took the big D in 1960, placed it in a circle with an arrow pointing the way at the right end. Simplicity meets dynamics.

The famous "Flying D" was born and has been flying through the tennis arenas of the planet ever since. The biggest tournaments use Dunlop balls, the best players Dunlop rackets. Steffi Graf. Martina Navratilova. "Zen master" John McEnroe. All celebrated many of their successes with the friendly help of Dunlop rackets. Decades of success also means decades of experience. Experience from which not only the professional athlete profits. Dunlop rackets and tennis balls traditionally also support your surf and volley, your topspin and your backhand slice.

The wood came first, later lighter, more stable materials. Like Dunlop itself, the tennis racket underwent a development that eventually resulted in Dunlop's current CX Series. Their sonic core technology favors harder, cleaner shots. Thanks to the unique Infingery material developed by BASF, the racquet also dampens the recoil of your shot and the vibrations of the frame are reduced by 37 percent. As a result, you hit more comfortably, more accurately and accelerate the ball even more effectively.

The Box Frame, on the other hand, offers more power and control thanks to its improved aerodynamics. All this is enhanced even more with the help of the matching balls. With balls that can also be used in professional tournaments - and that's totally fine. Dunlop uses selected Premium materials to ensure an extremely consistent performance and long durability of its tennis balls. So Dunlop's rackets and balls are among the best the tennis world has to offer - and at Keller Sports you can choose your favourite from the latest models and also find the right tennis bag for your racquet.

DUNLOP AND THE ATP

Tennis has certain requirements, Dunlop supplies. Reliable. And this for almost a century. Word has long since got around to ATP. So at the beginning of 2019, the men's world federation tied the legendary brand even closer to itself. For five years Dunlop will officially present the balls of the ATP Tour and the Nitto ATP Finals. So the yellow felt balls of the "Flying D" sail over the nets of all important men's tournaments off the Grand Slams. They have their own partners, whereby Dunlop for example also provides the official balls for the Australian Open. Professional material for your own court? No problem with Dunlop and Keller Sports.