Kari Traa was not only a very successful freestyle skier who won three Olympic medals and four world championship titles. The Norwegian is also the face behind the fastest growing sports brand in Europe. The company named after her specializes in premium sportswear for women. 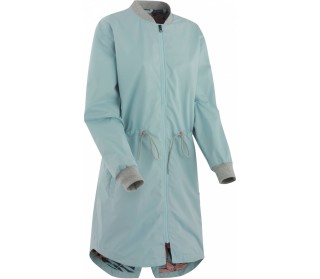 KARI TRAA: OWN DESIGNS SEWN BETWEEN THE COMPETITIONS

Even when Kari Traa was still active as an internationally successful freestyle skier, she was often seen knitting between training sessions and competitions. Her sponsors provided the athlete, who started her professional career in 1990 at the age of 16, with almost exclusively black and grey skiwear with nothing feminine about it.

Dissatisfied with this state of affairs, she sometimes cut her sponsor and team logos from the caps and sewed them onto her own designs. In 2002, when she had just won Olympic gold at the Winter Games in Salt Lake City, she decided to make her hobby her profession for good. This is how the Kari Traa brand was born - with the aim of combining the high functionality of sportswear with a distinctly feminine design.

In fact, when looking at the Kari Traa range, the distinct colourfulness of the modern styles is immediately apparent. "As far as design is concerned, we differ in colours and cuts. We really do use colors, which 15 years ago was a novelty in the sporting goods industry. Everything was very masculine and monotonous back then - since then we have changed the whole industry," says the founder about the success of the brand, which is now firmly established in twelve European countries as well as the USA. She herself comes from the small town of Voss, situated between two picturesque fjords in southwestern Norway. The harsh Scandinavian nature with its severe weather was and still is the main source of inspiration for the designs of Kari Traa articles.

It is also important to the founder that all available collections are perfectly tailored to the female body and still meet the needs for a sporty and adventurous lifestyle. The colourful items in our Kari Traa Store range from underwear, shirts, sweaters and jackets to headgear, scarves and gloves. The designers of the Norwegian label attach great importance to the best materials such as breathable merino wool for shirts. Of course, freedom of movement is also a clear focus in sportswear.

This is ensured by elastic inserts, which also ensure optimum ventilation. The attention to detail and the expertise of a professional athlete are evident, for example, in the elaborately crafted running tights such as the "Louise" model, which we offer as Kari Traa dealer Keller Sports. The tights have low-friction flat seams, reflective elements, side expansion zips and a practical pocket on the back. Finesses that also distinguish all other articles, which we often offer in the Kari Traa Sale at particularly attractive prices.

KARI TRAA FOUNDED HER OWN JUNIOR TEAM IN FREESTYLE SKIING

In addition to her work as an entrepreneur, Kari Traa has remained closely connected to her sport in her work with young talent. The background: When she ended her active career in 2006, after winning the Olympic silver medal in Turin, there was no one who could have followed in her footsteps in the freestyle skiing sector. In order to bring new female talents into the sport nevertheless, she founded the Kari Traa Freestyle Team in cooperation with the Norwegian Ski Federation that same year to organise the recruitment of girls for moguls and freestyle.

But Kari Traa is not only committed to the advancement of women in the field of sports. The Norwegian company launches major campaigns every year, which are primarily aimed at strengthening women's self-confidence and self-perception, but also their health. The "Celebrate Yourself" campaign, for example, addresses the pressures and expectations that women face on a daily basis. In order to encourage young girls and women to dare new things even more, Kari Traa also relies on a worldwide network of brand ambassadors. In addition to female skiers, volleyball players, triathletes and runners, bloggers, models and young female entrepreneurs are also represented in the team of the popular Nordic label. They are all united by their passion for sport and the desire for stylish and functional clothing true to the brand's motto: "For Girls, by Girls.