Norrøna products are designed for the rough wilderness of Norway. With enormous innovative power, great functionality, minimalist design and bright colours, the brand that first brought the Gore-Tex membrane to Europe has earned itself a great reputation among outdoor enthusiasts.

Norrøna products are designed for the rough wilderness of Norway. With enormous innovative power, great functionality, 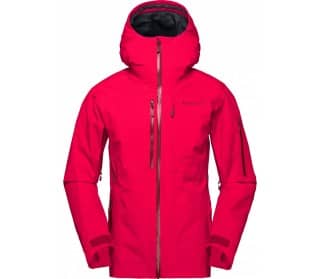 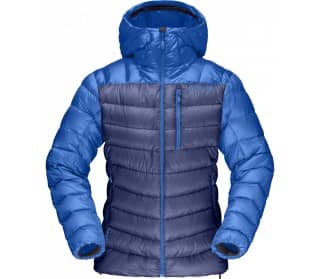 Norrøna
Lyngen Down850 Women Down Jacket

NORRØNA - QUALITY FROM THE COUNTRY OF FJORDS AND WALES

Norrøna carries the Norwegian wilderness within it: the brand was born in the land of fjords, glaciers and forests - and is now family run by the fourth generation of Jørgen Jørgensen. The company was founded in 1929 when the great-grandfather of the current owner, Jørgen Jørgensen, as a young craftsman, he laid the foundation for what Norrøna is today: a leading supplier of equipment and clothing for outdoor-adventurer. At the beginning of the company's history, the focus was on simple innovations such as leather straps, linen backpacks and cotton clothing. These already set the direction for Norrøna's later successes: The goal was always to manufacture outstanding outdoor products using the best technical innovations and the highest quality materials.

In its Norwegian homeland, the company had joined the ranks of leading manufacturers of backpacks, tents and outdoor apparel for decades and set some milestones. For example, the first tunnel tent with front and rear entrance comes from Norrøna. Also the first European prototype for a Gore-Tex jacket was developed by the Norwegians in 1977. Numerous Norrøna articles became real classics: names like Svalbard, Falketind or Narvik are well known among outdoor fans. They were all developed according to the company's own design principle "Loaded Minimalism". This means: To design straightforward products with strong colours as well as all important details for outdoor use.

No matter whether fleece jackets, soft shell pants or hardshell jackets, with Norrøna products nature is always in the foreground. The brand is the most important source of inspiration for all innovations. It is not for nothing that the various lines and collections are named after European nature reserves. But there is much more behind it than a purely coincidental naming. Each product range has a specific reference to the area after which it was named. It has also been designed and tested under local conditions.

The functional Falketind collection, which we offer in the Norrøna Shop at Keller Sports, is named after a Norwegian peak, for example, which can be climbed all year round. The water-repellent and breathable jackets and trousers made of fleece, down, hard shell and soft shell are therefore designed for all seasons. Light enough for summer and durable enough for winter. And best of all, no matter what the season, as Norrøna dealers we offer selected products of the brand in our Norrøna Sale at particularly attractive prices.

With a Norrøna hard shell jacket or soft shell trousers, the wearer can be sure that there is no useless ballast. For many years, the brand has been equipping demanding tours in the wildest corners of the world. Be it expeditions to the North and South Poles, winter ascents in the Himalayas or first ascents to remote peaks. Reliable, durable material is a must. Owner Jørgen Jørgensen, for example, says about the demands placed on his own products: "A new product is great, but a ten-year-old product is even better". No wonder, for example, that adventurer and polar researcher Børge Ousland has been contributing his experience to equipment concepts for decades and acting as a brand ambassador for Norrøna products. To this day, he is closely associated with the classic Svalbard product line.

CORPORATE RESPONSIBILITY IS REQUIRED AT NORRØNA

However, Norrøna does not only pay attention to robustness, function and design. Corporate responsibility and sustainability are also taken very seriously. This starts with the selection of suppliers and goes so far as to avoid air transport as much as possible. Norrøna also cooperates very closely with its suppliers and strives for long-term partnerships. Factory inspections and controls ensure fair working conditions in other parts of the world as well. The raw materials are also recycled whenever possible. In addition to well-known certifications such as the Responsible Down & Wool Standard, the Norwegian family-owned company also donates one percent of its total sales to environmental initiatives.