Menu cloudboom
The voucher code has been copied to the clipboard.
2333

Gently and naturally your foot lands on the asphalt. Fractions of a second later you explode into the next step again, chasing your best time. A revolution of the running feeling. ON once had nothing less in mind and that's exactly what ON did. A natural running feeling, a run like on clouds, where you repel yourself explosively, run towards your goal more energetically than ever before - all this ON gives you. 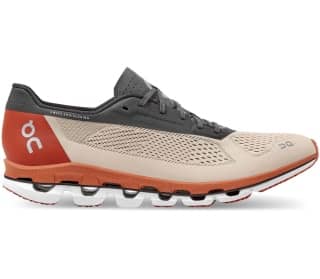 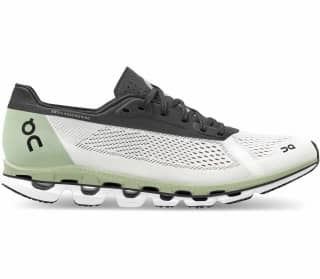 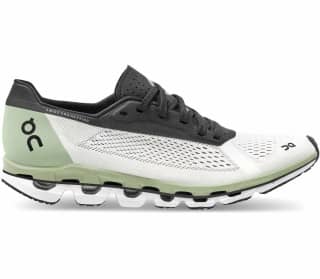 Technology is only as good as its input. To design a running shoe for the perfect running feeling without intensive running experience is almost impossible even with the help of the highest engineering skills. The fact that Olivier Bernhard had Achilles tendon problems can therefore be seen as both a curse and a blessing. As a curse, because the multiple Ironman winner and duathlon world champion was running towards the end of his career. As a blessing, because he teamed up with a Swiss engineer who had the same intuition: to design a shoe that supports the natural walking motion of the foot, both absorbs it and enables an explosive kick.

Bernhardt tried out the prototype himself and obviously gave his Achilles tendon what it needed. After a few weeks the inflammation had passed and Bernhard had found his way. A path he has been following together with two friends since 2010. David Allemann and Caspar Coppetti joined him. ON was born - and didn't even make a long run at it. Founded in Zurich in January 2010, the brand adorned itself a month later with the ISPO Brandnew Award. It is rare to find a better measure of entry.

RUNNING ON CLOUDS WITH ON RUNNING

"Walking like on clouds." ON creates the best conditions for intensive and long runs. The compass has always been and still is the performance, it shows the way. The question of suitability as a street outfit is in the background - and is still answered in passing. Because design is by no means indifferent to ON. It even follows a very clear intention. "Above all, we want to take something away from all the blingbling, from everything that is pure decoration without function, and concentrate on the essential," says Olivier Bernhard. In the end, it's the performance that decides, while simple and stylish designs open the door to everyday urban life.

ON delivers athleisure without actively striving for it. Almost shyly, the modest logo is emblazoned on the shoes and still gets the attention it deserves. It's not for nothing that ON was awarded the ISPO Gold Award for Best Performance Shoe for the second time in 2015. 2016 also saw the addition of selected, stylish yet understated performance running apparel for the endurance sector. What started as a project among friends in Switzerland in 2010 has established itself only eight years later on the most important running markets of the planet, in the USA, in Japan, in Germany, even in Australia and Brazil. A run on clouds is not so easy.

GOOD REASONS FOR ON

ON RUNNING AT KELLER SPORTS

Support instead of counteract. ON does not want to interfere too deeply in your run. Instead of controlling running movements with a rigid sole, correcting movement sequences, ON's CloudTec® cushioning promotes the natural movement of your stride. As a consequence of your individual running style, their small hollow bodies compress as they emerge. Without being guided in one direction by the shoe or sole, the foot can roll naturally. In addition, you naturally need momentum when running, the cushioning should cushion your foot softly, but not lull it to sleep.

Therefore, the cloud elements store the energy of the impact in order to release it as quickly as possible during the kick. You rarely get closer to the state of suspension. Especially since ON gives you the right shoe for every run, for trails or asphalt as well as for long or short distances. A real revolution. At Keller Sports you can join it.

HOW DO THE RUNNING SHOES OF ON RUNNING FEEL?

The running feeling is very special and difficult to compare with other brands. Above all, On Running is a great mixture of a direct running feeling in combination with a lot of comfort. The running shoe models don't look spongy at all and thanks to the On-Speedboard it is very easy to build up speed in the Swiss running shoes.

With the help of the high-quality workmanship, no large shrinkage is necessary. So you can also run On Running running shoes from the box without problems over 20 kilometers and have no problems at all. Here we present you three running shoes from On Running, which you can use for your next running session:

ON RUNNING - FROM ATHLETES FOR ATHLETES

When Frederik Van Lierde crossed the finish line first in 2013, he had not only won the Ironman in Hawaii. He also gave visual instruction to the world. After all, ON Van Lierde's shoes had just worn almost on clouds over the last 42 kilometres of the triathlon world championship through Hawaii's volcanic desert - and the Ironman winner is not alone. Among others, the Swiss Olympic champion in the 2012 triathlon Nicola Spring and triathlon world record holder Tim Don trust in the revolutionary ideas of the young Swiss company.

This brings insights. These are insights that Olivier Bernhard compares with his own and ultimately brings to his innovations. So much for performance. Thanks to Emmanuel Chivo Lubezki, ON has even made it to Hollywood. For the shoot with Variety for his third Oscar win - this time as the best camera for "The Revenant" - the Mexican threw himself in the finest threads. And in his favorite shoe: the ON Cloud.

ON QUALITY - "ENGINEERED IN SWITZERLAND"

Professional input from the sports sector is one side of the success medal, engineering the other. That's why ON feels in good hands in its Swiss home country and is constantly working on further innovations in its laboratories in Zurich. "Swiss engineered" is a seal of quality that the entire running world has long appreciated. ON brings its shoes to Asia, China and Vietnam for production. The owners of their production plants know the brand personally there and therefore monitor compliance with working conditions and quality standards themselves.