Without this French company, the history of skiing would most certainly have taken a very different path. Rossignol invented the first skis and since the early 20th century they have been the icon for winter sports on the pistes. Today, the manufacturer is the market leader worldwide in the area of alpine skiing. Not without reason: quality, reliability and a quest for perfection still make their dashing sports equipment among the best in the world of skiing today.

Without this French company, the history of skiing would most certainly have taken a very different path. Rossignol inve 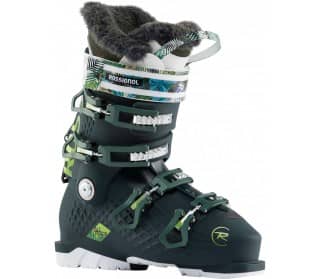 ROSSIGNOL: OVER ONE CENTURY OF SKI-KNOW-HOW

Abel Rossignol, born 1882 in France, was a gifted carpenter. Initially he made his living mainly with wooden spindles, which he made for textile production. In 1907 Rossignol came into contact with skiing. The idea to make own skis from wood was born fast. Soon, Lieutenant Gelinet, a military officer, became the first to notice the skis of the carpenter and bought skis at Rossignol for himself and some soldiers. Word soon got around that the woodworker from Voiron produced high quality skis. In 1909 he even won his first prize at a fair in Charmonix. Abel's son, who bore the same first name, grew up with the same passion for sport and was also to have a lasting influence on the company's future.

He became a good skier himself and his friendship with the then world-class racer Emile Allais turned out to be a stroke of luck for the company. At the 1936 Olympic Winter Games, Allais won the bronze medal on Rossignol Ski. He then worked closely with Abel Rossignol on the further development of the products. After his active career, Allais moved to Canada, where he helped build slopes and ski lifts with his expertise and later worked as a ski instructor. When he returned home years later, he brought his buddy Abel Rossignol Jr. new skis from overseas with him. They were not made of wood, but of metal. A completely different approach than the one used by the French for their absolute wood long runner, the ski "Olympique 41", and which also inspired Rossignol to further innovations.

ROSSIGNOL: A COMPANY ON THE FAST LANE

As with every success story, there was also a time at Rossignol when things didn't go so well. After all, the skis were not responsible for it. In addition to the production of skis, the French had continued to rely on the production of reels for the textile industry, which collapsed in the mid-1950s. The result: considerable losses in turnover. Again, Allais came into play, who contacted the entrepreneur Laurent Boix-Vivres, whom he had met during the construction of a ski resort in Courchevel. The smart businessman bought Rossignol, pushed off the weaving sector to concentrate fully on the profitable skiing industry from then on.

A decision that turns out to be absolutely right. A few years later Jean Vuarnet already won downhill gold on the first Rossignol non-timber ski in Squaw Valley. Shortly afterwards the French introduced their first fiberglass skis. In the 1970s, Rossignol continued to swim on the wave of success, selling over a million pairs of skis worldwide for the first time. And afterwards, the ski manufactory continued to go exclusively uphill. The ski boot brand Lange was bought, and later the binding manufacturer Look and other companies were integrated into the group. The Rossignol Group now has eleven sports brands under its roof and is still in the fast lane.

In the Rossignol brand shop at KELLER SPORTS you will find women's and men's skis for Piste and Freeride as well as the matching ski boots. No matter if you are a beginner or an advanced skier - for example as a passionate and technically experienced skier - we have the right ski for you in the Rossignol Sale. For example, the Hero Elite HP from Rossignol, which is optimized for speed-oriented giant slalom fans. And even if you are looking for the perfect ski boot for your next descent, you will find it in our shop. Both more comfortable ski boots like those models for ladies and gentlemen from the "Alltrack" series, as well as powerful high-performance shoes like the "Hero World Cup 110". Thanks to its dual core construction, the latter offers a dynamic flow of force and optimum control over the flex - and guarantees a lot of fun on the slopes.

ROSSIGNOL AND THE BAND OF HEROES

What happens when a brand has been one of the best producers of its sport for over a hundred years? It has such a great reputation that the protagonists of this guild also rely on it and like to use its high-quality products. Rossignol's "Band of Heroes", as the French call the collective of their testimonials, is proof of this. They are made up of well-known stars of the scene: Ace of Downhill and Streif winner Thomas Dreßen is just as into Rossignol-Ski as the slalom greats Tessa Worley and Henrik Kristoffersen. They all provide the ski engineers at Rossignol with valuable insights that flow into the development of innovative skis and ski boots and continue to improve their performance.

ROSSIGNOL SKI: "ANOTHER BEST DAY" FOR EVERYONE

Over a hundred years of innovation and countless medals have made Rossignol the progressive and confident company it is today. Under the hashtag #AnotherBestDay the French therefore invite all skiers to turn every day on the slopes into an incredible experience. It doesn't matter whether you have ambitions to take part in competitions or simply want to enjoy the mountain panorama during a quiet ride. The beauty of the sport grips everyone as soon as they let the boards glide over the freshly fallen snow. From world champion to beginner Rossignol has something for everyone. After all, passion is always in the foreground for the company.