Menu Search
The voucher code has been copied to the clipboard.
324

For advanced tennis players, regular stringing of the racquet is essential to ensure that the player benefits from the highest level of power and precision. The Signum Pro brand is one of the world's best known and most renowned manufacturers of tennis strings. Items like Poly Plasma, Hyperion or Tornado offer exceptional control and rapid spin - all "Made in Germany". 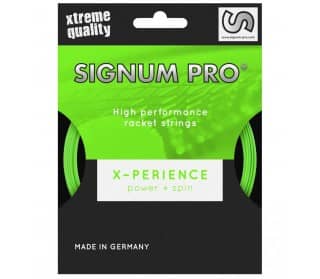 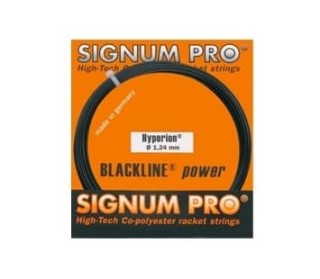 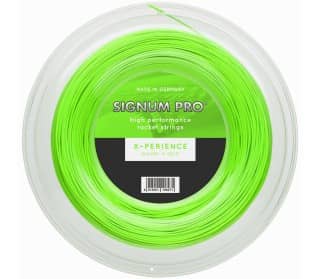 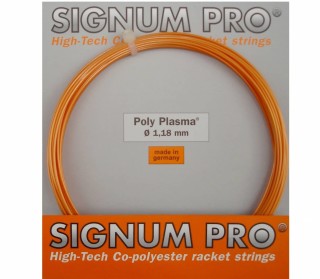 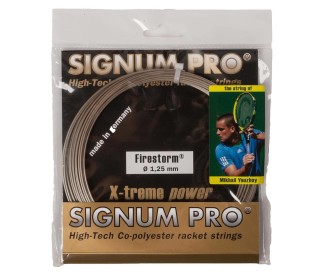 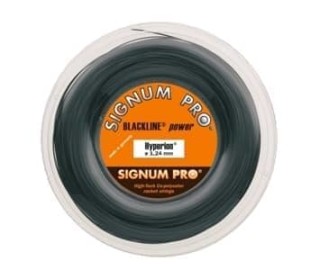 Finding the right tennis strings is sometimes not easy. So there is a suitable tennis string with individual playing characteristics for every type of player. Whether acceleration, control, ball feel, durability, spin or comfort - the market offers a wide variety of different tennis strings that are specifically designed to meet the wishes and needs of the individual player. If you want to get more out of your game, you should therefore make a conscious decision for a specific product.

Thanks to renowned manufacturers such as Signum Pro, tennis strings have also undergone constant development over the past decades. Today's strings, made of polyester and other synthetic materials, allow for ever higher speeds and more powerful strokes in modern tennis. The German premium brand Signum Pro - on which, among others, ATP players Matteo Berrettini, Mikhail Youzhny and Sergiy Stakhovsky rely - plays a major role in this. And of course Keller Sports as your personal Signum Pro dealer.

SIGNUM PRO IS CONSIDERED A PIONEER IN THE INDUSTRY

The company from the small town of Deggingen in Baden-Württemberg has been one of the world's leading manufacturers of tennis strings for years. In addition to tennis strings - the Signum Pro article par excellence - Brand also has stringing machines, bags, grip bands and tennis balls in its range - all "Made in Germany". Company founder Bernd Grüttner is considered a pioneer in the industry. He was the first to succeed in bringing hexagonally profiled strings onto the market. He also came up with the idea of axially twisted, so-called "twisted" strings.

But the brand became known above all for its orange "Poly Plasma" strings, which were named "String of the Year" on the expert website saitenforum.de in 2004, 2005 and 2006. All tennis strings are offered as yard ware, whereby the players can also choose between standard rolls with 120 or 200 meter string length in our Signum Pro Store. Simply detached from the roll, after a side is torn in training or a match, you can react immediately and re-set the tennis racket.

The stringing of a tennis racket can be done with little experience in this sport. However, the following always applies: the type and quality of the string type has a great influence on the playing behaviour. If the stringing is too soft, it has an unfavourable effect on the power transmission of the stroke; if the strings are too hard, they will naturally break more quickly. That's why we at Keller Sports offer several premium Signum Pro products online, so you can find the ideal and at the same time durable tennis strings for your game. A classic are the already mentioned "Poly Plasma", which you can find in our Signum Pro Store.

These strings made of orange polyester began their triumphal procession a few years ago as an insider tip and are now firmly established in the professional sector. What distinguishes the string above all is its tension stability. Thus the Poly Plasma, in contrast to many other monofilament strings, does not wear out even after a long time. All in all, an absolute top string for competitive players who attach great importance to control and tension stability. In our Signum Pro Sale it is also often available at an attractive price.

Signum Pro also offers a real alternative for spin freaks with the Tornado. These were the first monofilament co-polyester strings with a hexagonal profile on the market. Thanks to an innovative manufacturing process in which the heptagonal string is axially twisted, the Signum Pro Tornado allows balls to be quickly accelerated and precisely placed. The extraordinary twist created by the angular surface of the black strings brings tennis fun at the highest level and at the same time provides tension-filled playing comfort.

CHANGE THE STRINGS AT LEAST ONCE A YEAR

By the way: The following rule of thumb has proven to be a good way of determining when to replace the tennis string regardless of a tear: As often as you play tennis in the week, as often in the year you should renew the string. However, this should be done at least once a year, as the string is subject to natural ageing, independent of use in the tensioned state.