Menu Search
The voucher code has been copied to the clipboard.
1728

For just under 100 years, the company Völkl from Straubing has been passionate about skiing. This successful manufacturer appeals to customers worldwide with their first class skis. Developed with the help of athletes in countless races, their freestyle and freeride skis are fantastic in deep snow. On the famous Völkl Racetigers you'll be sure to make the pistes tremble. In the Keller Sports online shop you will find the right Völkl skis for every slope and sporting adventure. 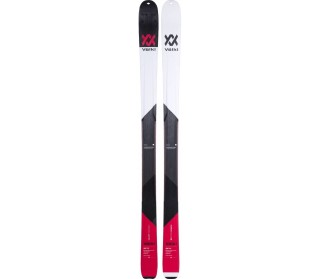 When Georg Völkl founded his own company in Straubing at the end of the 19th century, mountains and pistes had no priority for him. He made carriages. For the time being. His son Franz extended the portfolio by boats and sledges - and in 1923 finally laid the foundation to become one of the world's leading wintersports-companies. Under the name "Vöstra" Völkl produced now also skis but always remembered his principles. Craftsmanship and love of detail had been the hallmarks of Völkl since it was founded.

Now all that was needed was someone to successfully lead all this into the future. So in 1952 the third generation took over. Franz Völkl Junior modernized the company. He adapted the ski production to the latest technical standards and thus constantly advanced the innovative strength of the company. Völkl no longer only wanted to participate, Völkl wanted to shape the future - and the Bavarian ski builder succeeded in doing so in the long term.

At first, the competition had not trembled much when Völkl presented its latest idea in 1967. The traditional floor-level design approach had suddenly become black-and-white striped skis, which stood out clearly from the mass. Völkl had brought its now legendary zebra pattern onto the market, thus securing its undivided attention. The competition mocked at first, but the customers bought.

And when the brand entered the Ski World Cup a few years later, it finally unleashed the innovative spirit of its employees. Völkl not only established itself, the brand created benchmarks and achieved success after success. Frank Wörndl, Katja Seizinger, Martina Ertl, Hilde Gerg - they all celebrated their enormous successes with the big V on and the right materials in the skis. Völkl had discovered mountaineering completely for himself and never let it go again - without forgetting the roots of the brand: It was not until 1999 that Völkl opened its new factory. Not in Asia. Not in the USA. In Straubing. There innovative ski ideas are still being produced in one of the most modern production facilities in the world .

Völkl has been causing a sensation for decades with its alpine, freeriding and touring skis as well as the necessary accessories like ski bags and ski skins. One of Völkl's most central and sustainable developments is the rocker construction. Initially conceived for deep powder snow, the brand was one of the first companies to put the concept in all of its ski lines. Thanks to a negative preload, the effective edge length is increased when cornering at high speed.

The turning is easier, off-piste you have more lift and the ski is more agile. In addition, there are innovations such as UVO, the first freely rotating 360°-Dümpfung for your skis, which significantly reduces unexpected vibrations. This makes your skis quieter and you have more control and swing even more precisely. You can get your Völkl skis at the Völkl shop at KELLER SPORTS. But not only those. In addition KELLER SPORTS equips you with ski and ski boot bags from the biggest German ski brand - and also has Völkls ski skins in its assortment for your next ski tour.

QUALITY TESTING IN THE WORLD CUP AND FREESKI WORLD

Slalom world champion Frank Wörndl trusted Völkl at that time and also today top ski racers like Stefano Gross get podium places with the innovative skis from Straubing. The alpine World Cup with some of the best and fastest athletes in the world is one of them. At the same time, Völkl is traditionally committed to freeskiing. The company produced its first wide skis especially for deep snow as early as the early 1990s and currently works with freeskiers such as Fabio Studer, Paddy Graham and Sam Smoothy.

And as always, when top athletes share their impressions and expertise, you quickly benefit too. Thanks to the cooperation with such top athletes, you will find the right skis for both rapid descents and lazy tours through unprepared mountain worlds. Skis that minimize the force effort and effectively transfer the force into the snow via their in-house binding systems (Marker). In addition, Völkl has special children's skis in its portfolio that also make the first and second turns easier for young racers.

The fact that Völkl built one of the most modern production facilities in the world in Straubing is not an end in itself. The brand is working hard on its products and materials. The reward are high-tech developments such as 3D.Glass. In contrast to traditional glass construction methods, the fabric layers are folded several times, mainly three-dimensionally. This increases the edge grip, the skis remain more stable and simply feel better.

The V.WERKS technology reduces the weight thanks to high-tech materials such as carbon or titanium, but at the same time increases the performance of the ski. Thus, the Titanal frame enables more stability and inoculation over the entire length of the ski. At Völkl, all these high-tech innovations take place under the premise of reducing the amount of force required by skiers and thus making longer ski runs possible for everyone - and so the brand is now also producing its special lightweight construction in series.