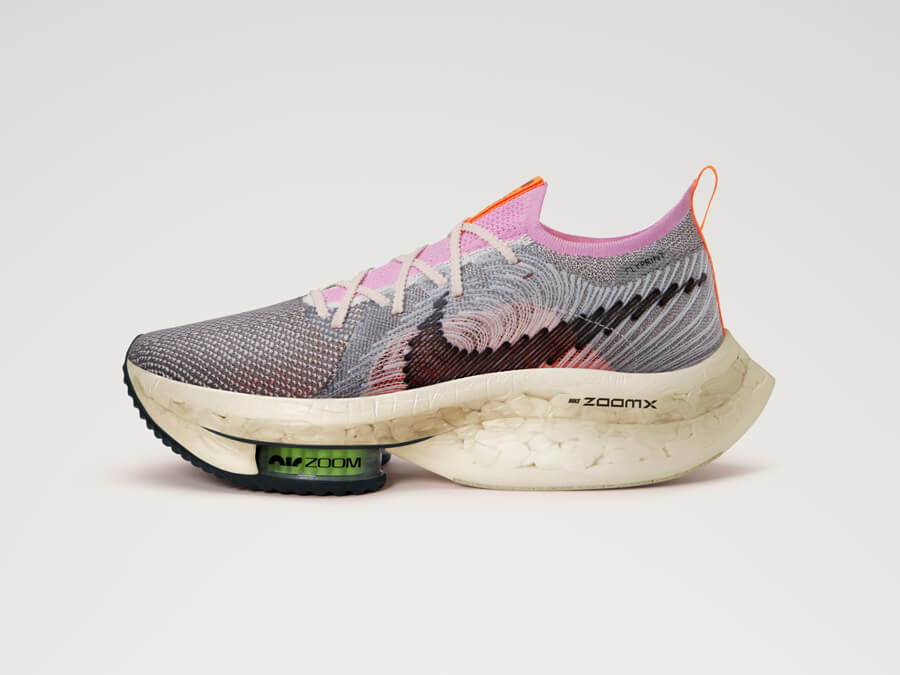 Extremely Fast and Sustainable: Keller Sports is the exclusive retail partner in Germany for the Nike Air Zoom Alphafly Next Nature! The shoe is available for Keller Premium Members and users of the Keller sMiles App from 9 a.m. on September 23rd!

You can also win the Nike running shoe in one of the Keller sMiles Challenges and even help the environment: For every purchase and every finisher we plant a tree with our partner natureOffice GmbH and support their project Togo. Find more information below.

The "Next Nature" is not just a new color update of marathon king Eliud Kipchoge's record-breaking running shoe. Instead, the model reflects Nike's commitment to sustainability and the relentless culture of innovation of the world's largest sporting goods manufacturer: the Alphafly is now not only Nike's fastest running shoe, but also one of its most sustainable! 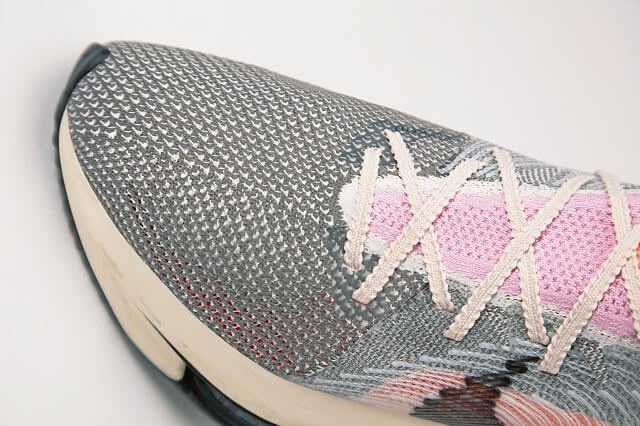 Launch Countdown for the Nike Air Zoom Alphafly Next Nature

Reducing waste - without sacrificing on performance

But what's really different about the Nike Air Zoom Alphafly Next Nature? Nike incorporates recycled fabrics, cuttings and material from used running shoes throughout the running shoe - at least 50% of the shoe by weight is made from recycled materials. Reducing waste – without compromising performance.

Starting with the upper, which is made of Flyknit and Flyprint: Here, the Nike Zoom airbags uses partically recycled TPU material used in the midsoles. The Flyknit is made of unused and leftover (remnant) yarn, which in turn is made from recycled materials.

The laces are made from a polyester recycling process and for the midsole, Nike presses (at least 70%) recycled foam into a mold to form a new midsole. For the carbon plates, Nike uses Flyplate made with at least 50% recycled carbon fiber The whole package is topped off with a recycled shoe box. 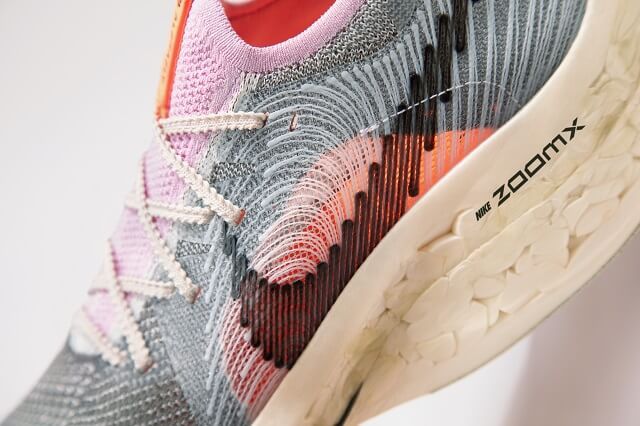 Win a "Next Nature" and support the environment

The product besides the exclusive availability for Premium Members in our webshop, the shoe is also available for users of the Keller sMiles App. All you have to do is take a look at the Reward section of the app! In addition, a challenge is waiting for you in the app running from 17th to 25th of September, in which you can not only win a model, but also automatically do something good for the environment by completing the challenge:

Together with our partner natureOffice GmbH we plant a tree for every runner who either purchases the shoe or finishes our 15km Longrun challenge! In addition to climate protection, the reforestation project in Africa also aims to improve social structures, create jobs and provide local people with tools for energy production and water supply. 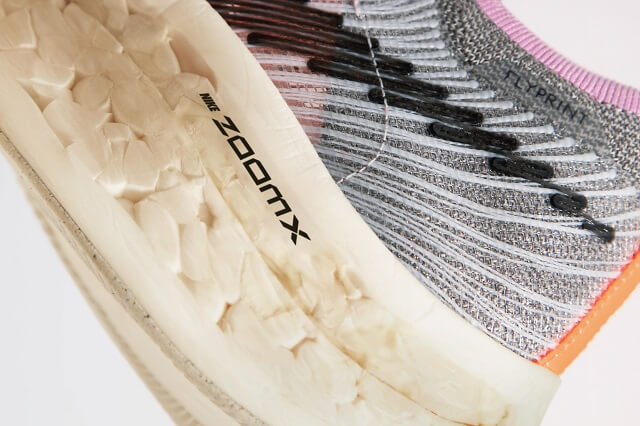 1:59:40. Eliud Kipchoge. World record. Even though there were no natural competition conditions, the Kenyan is the first human to run the marathon under two hours. In Vienna at his foot: the prototype of the new Nike Air Zoom Alphafly NEXT%.

Since June 2nd 2020 at 10:00 am the world record running shoe is launched and added to our range - 60min exclusively for Premium Members. We present the Nike Alphafly NEXT% and its innovations compared to the Vaporfly NEXT%. One thing is for sure: the Nike Air Zoom Alphafly NEXT% is a running shoe that will break many more records. 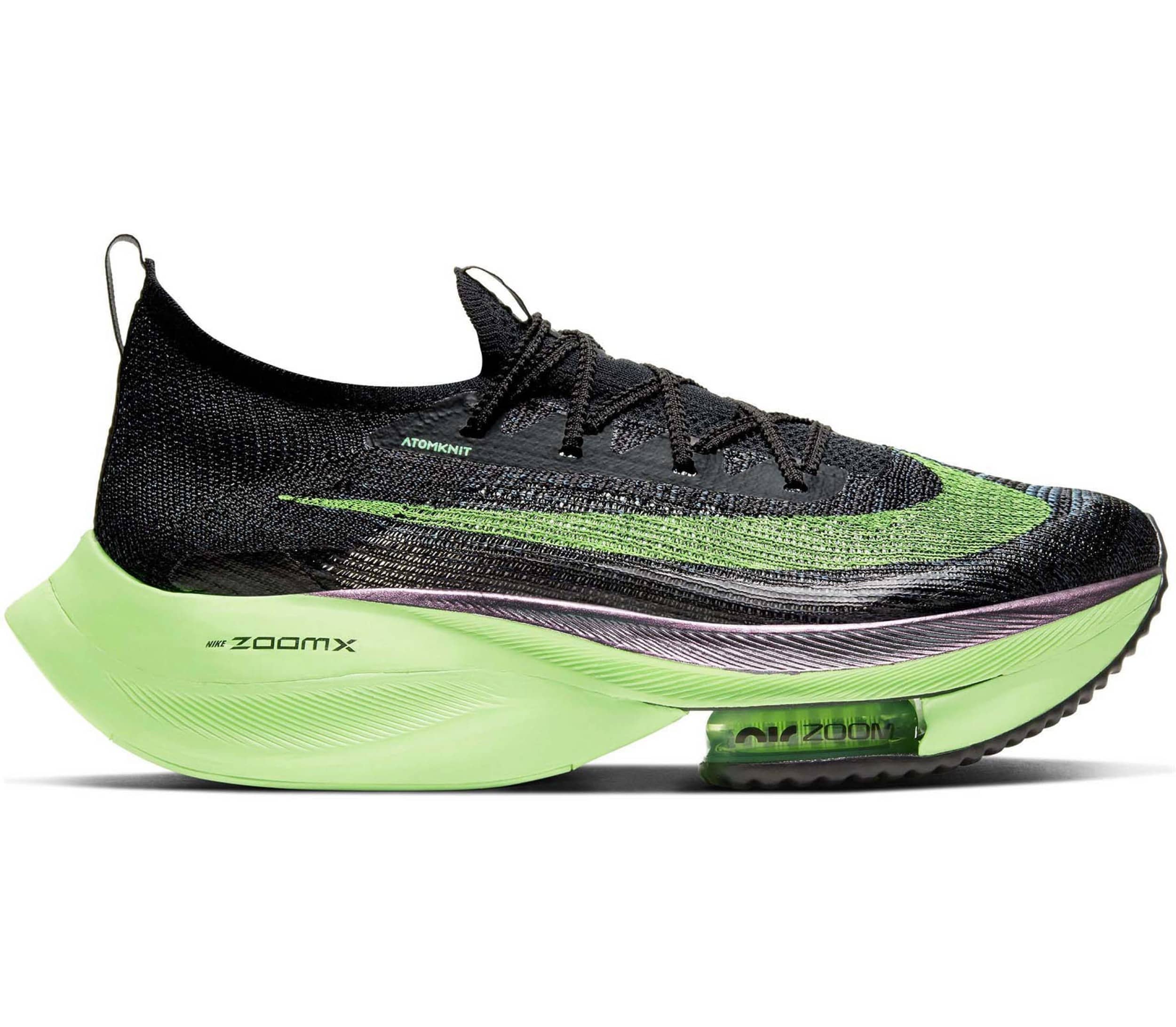 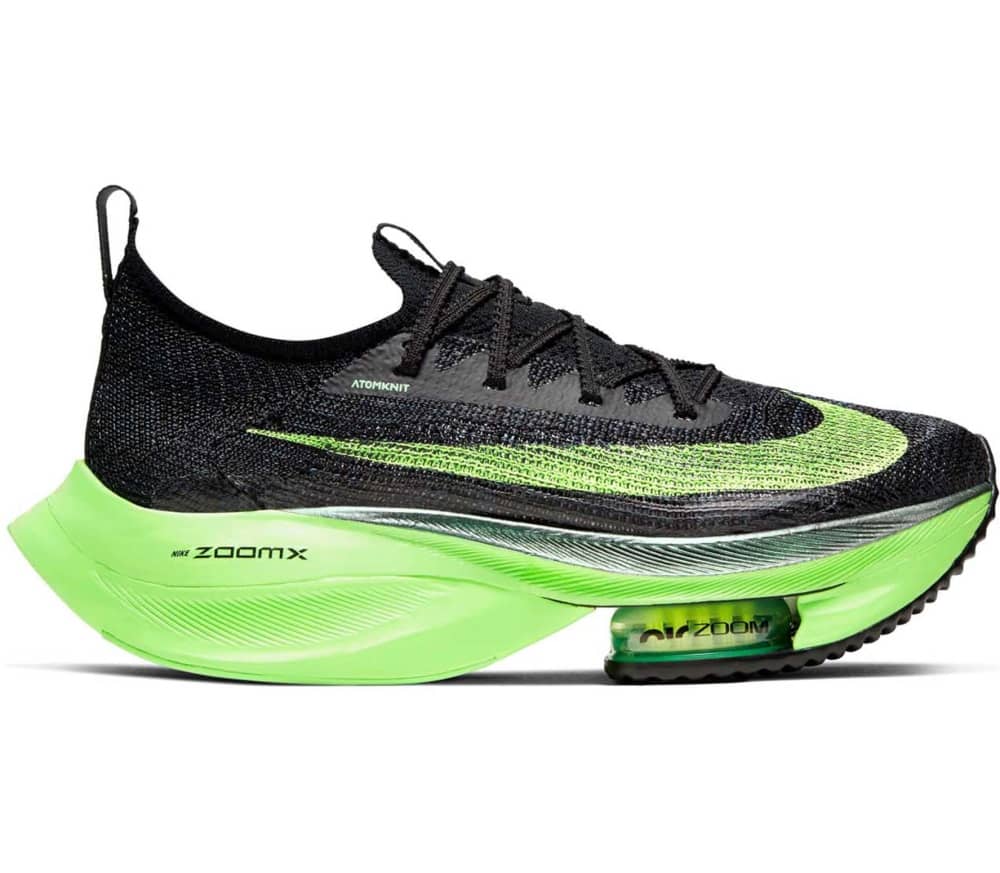 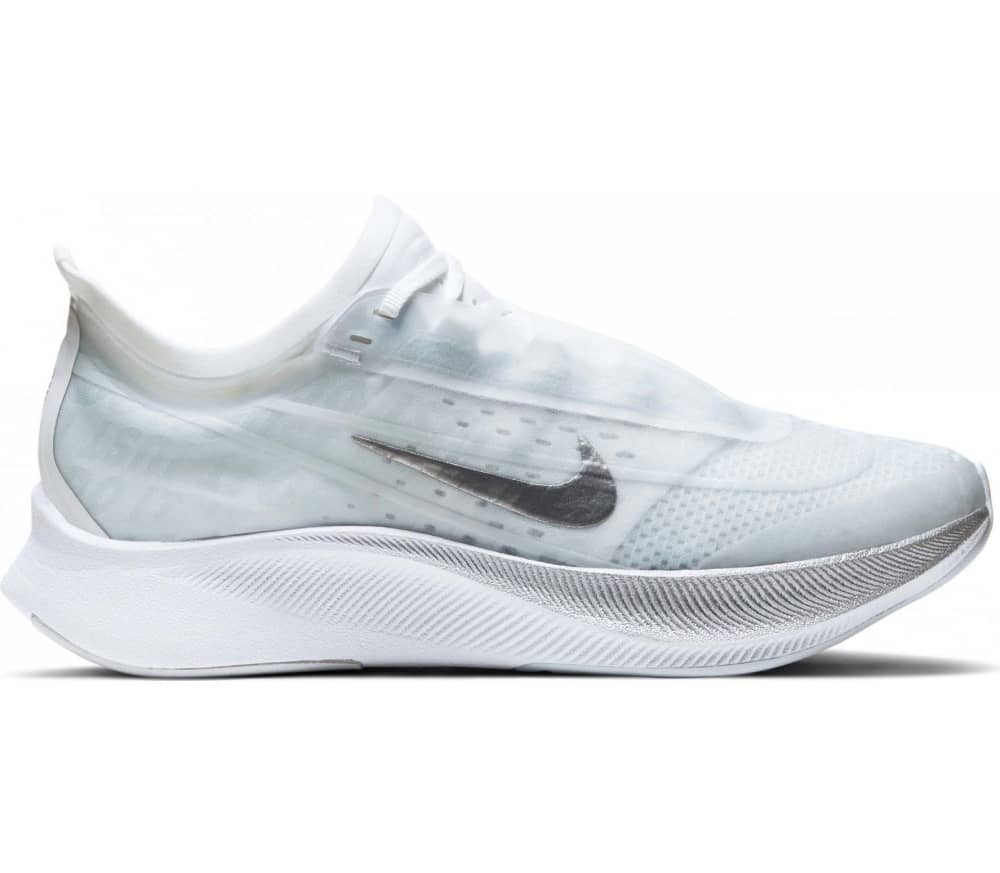 The creation of the fastest marathon running shoe in history

It all started in November 2016 and Nike has announced that they want to break the eternal two-hour mark in the marathon with the project Breaking2. Together with Eliud Kipchoge and two other elite marathon runners, they started in Monza in May 2017. With a time of 2:00:25 from the same Eliud Kipchoge, they just missed the target by a very narrow margin. Nevertheless, it must be said that it was not a defeat for Nike. The sub-2 marathon was within reach. 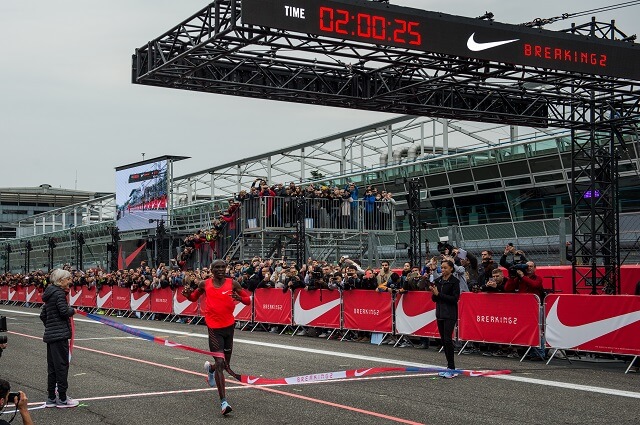 Especially for this event a new kind of marathon running shoe was developed, the Nike Zoom Vaporfly 4% with the new carbon fiber plate in the midsole. For the running event in Vienna two and a half years later this development was decisive. Only the realization of what is possible with such a carbon fiber plate in the sole and the right foam paved the way. With the Nike ZoomX Vaporfly NEXT% a lot of new records and victories over different long distances were set over the last year. Looking at the World Marathon Major series alone, out of 21 podium finishes in the men's race, only two runners were not wearing Nike shoes.

"The groundbreaking research that led to the original Vaporfly unlocked an entirely new way of thinking about marathon shoes. Once we understood the plate and foam as a system, we started thinking about ways to make the system even more effective. That’s when we struck upon the idea of adding Nike Air to store and return even more of a runner’s energy and provide even more cushioning."
- Carrie Dimoff, marathon pro and part of the Nike Advanced Innovation Team

Nike took the missed goal of Breaking2 as a clue, motivation and proof of what is possible. The Vaporfly 4% and the Vaporfly NEXT% were further developed and improved once again. In October 2019 in Vienna the time had come. With the prototype of the Nike Alphafly NEXT% on his foot Eliud Kipchoge crossed the finish line after 1:59:40 after 42,195 km. The long thought impossible was done. Perhaps the biggest sound barrier in running was broken. You can find out here what these innovations are and how they improve you and your running. 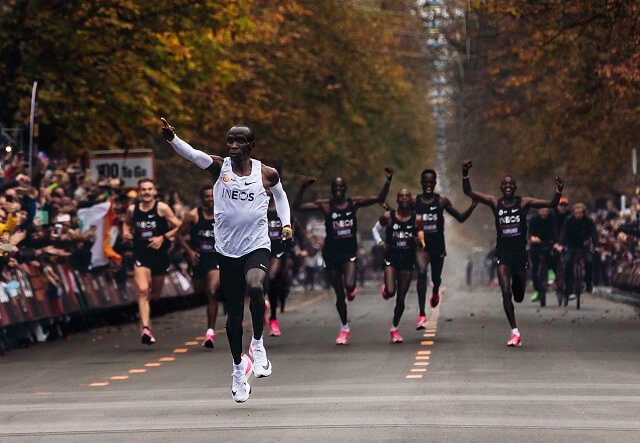 The four new features of the Nike Air Zoom Alphafly NEXT%

The new fastest running shoe in the world comes with four new features compared to its predecessor, the Nike ZoomX Vaporfly NEXT%. Perhaps the most noticeable is the Nike Air Zoom Alphafly NEXT%: Air!

On the forefoot you will find two responsive Zoom Air chambers. The Nike Air technology has been used for many years in various models, including Nike running shoes and sneakers. The air-filled chambers provide even more energy recovery when pushing off the ground. Every step becomes softer and more energetic.

The second change is also easily recognizable by the silhouette of the shoe. The Nike Air Zoom Alphafly NEXT% has even more ZoomX foam in the midsole than its predecessor. More foam means even softer cushioning but also more responsive. Perhaps the biggest advantage of the ZoomX material is its light weight. Despite the distinctive thick sole, the running shoe is extremely light. 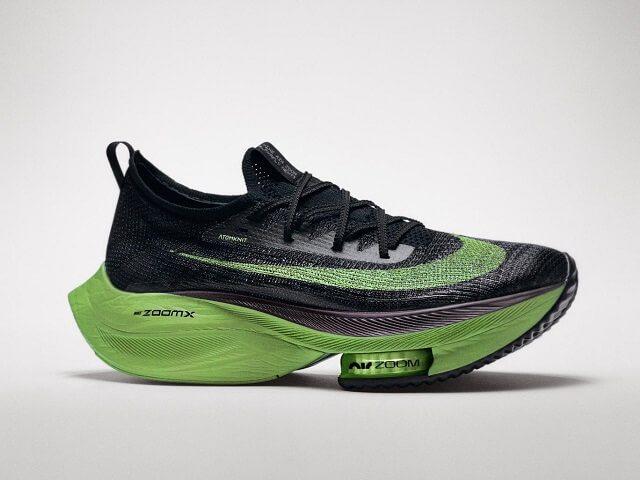 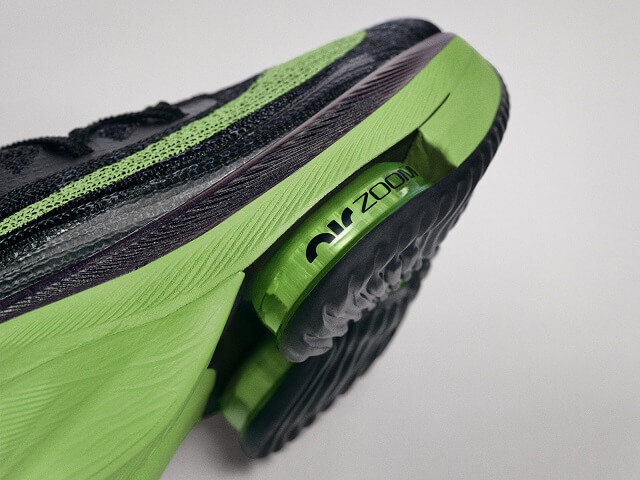 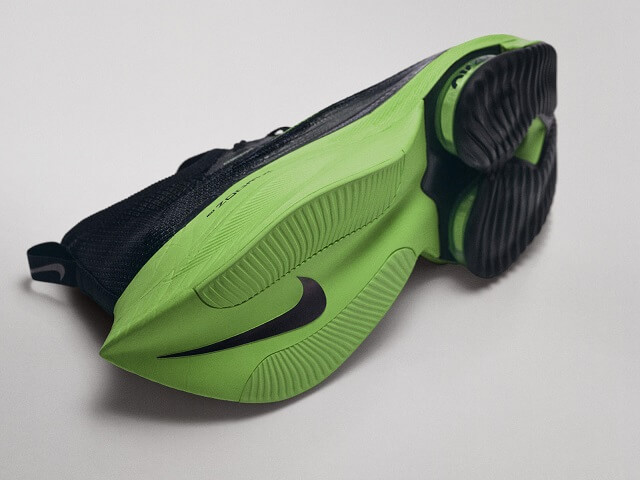 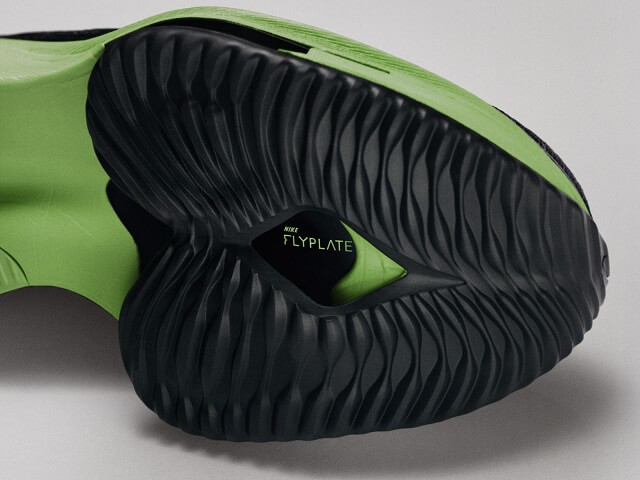 Nike Flyplate: stiffer in the forefoot for even more reactivity and stability 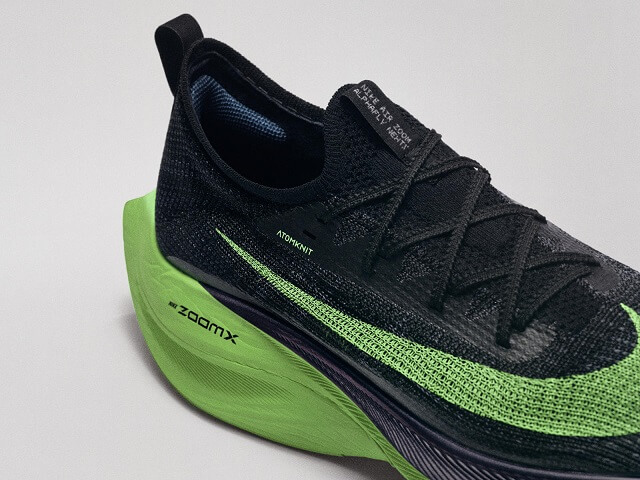 Nike Atomknit Upper: light, breathable and does not absorb water

The third change to the Vaporfly NEXT% is also found in the sole. The flyplate, the carbon fibre plate mentioned above, has been revised once again. Now it is a little stiffer in the forefoot, which pushes you even more forward when walking. The plate runs along the entire length of the sole and works like a spring with every step. At the same time it provides stability during the rolling motion. A completely new running feeling that every runner should try out.

After the many innovations in the sole, Nike has also taken another look at the upper material. The result: Atomknit. Nike wanted to save even more weight for the new shoe, after all every gram counts in a marathon. Starting with the well-known Flyknit material, the brand developed a new upper material. By damping and stretching the Flyknit fibres, the so-called Atomknit was created. It is lighter, more breathable and absorbs almost no water.

"For runners, records like the four-minute mile and two-hour marathon are barometers of progress. These are barriers that have tested human potential. When someone like Eliud breaks them, our collective belief about what's possible changes. Barriers are inspiring to innovators. Like athletes, when a barrier is in front of us, we are challenged to think differently and push game-changing progress in footwear design."
- Tony Bignell, VP, Footwear Innovation 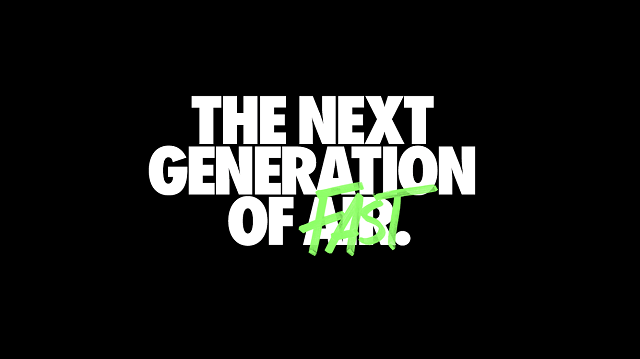 When will the new Nike running shoe be released?

Update: Meanwhile the launch date for the Nike Air Zoom Alphafly NEXT% is fixed. The Nike running shoes was released on June 02, 2020. From that day on we were able to offer you the shoes. A little tip: It's worth being fast. Why the launch date was not fixed for so long was due to several reasons:

Through the many successes, podium places and record times it became clear that the performances can be directly related to the Nike running shoes. So it didn't take long until some people started talking about the Nike shoes as a scam or some other kind of doping. The Nike running shoes should even be banned.

This did not escape the attention of World Athletics, the umbrella organization of all national athletics federations. After some investigations, they approved the Vaporfly 4%, but the Vaporfly NEXT% and the times they had run in with it. Only the prototype of the Alphafly, with which Kipchoge broke the two-hour mark, was banned.

The reason for this was new rules for running shoes: the sole may be a maximum of 40mm thick and only have one carbon fibre plate. But the most important innovation was that all running shoes must be available on the open market for at least four months before elite marathon runners are allowed to wear them in competitions.

Due to the Corona crisis, the Olympic Summer Games in Tokyo were now also postponed by one year, so the 4-month rule was no longer a decisive factor. Due to the uncertain worldwide situation the launch of the Nike Air Zoom Alphafly NEXT% was delayed a little bit, so it didn't come out in March or April. Mark June 2nd, 2020 red in your calendar so you won't miss the launch of the fastest shoe in the world.

THE NEW ASICS GEL-KAYANO 27 PUT TO THE TEST

THE ON CLOUDSWIFT RUNNING SHOES IN THE TEST