*Terms of the offer:
Articles marked with "Members Only" and "Limited" are excluded from the premium discount. If you want to continue your Premium membership after the 6 months are up, you don't need to do anything: the membership automatically extends for another 12 months. Should you not wish to extend your membership, all you need to do is cancel it in "My Account" at least 14 days before the 6 months are up. After the first 12 months you can also end you membership in the same way and at any time. Members offered a reduced membership fee, or with an initial membership of 6 months, will be charged the standard £7.99 fee upon renewal. You will receive regular exclusive Premium offers and information by e-mail. By registering you confirm that you accept the general terms and conditions.

*Terms of the offer:
Articles marked with "Members Only" and "Limited" are excluded from the premium discount. If you want to continue your Premium membership after the 12 months are up, you don't need to do anything: the membership automatically extends for another 12 months. Should you not wish to extend your membership, all you need to do is cancel it in "My Account" at least 14 days before the 12 months are up. After the first 12 months you can also end you membership in the same way and at any time. Members offered a reduced membership fee, or with an initial membership of 6 months, will be charged the standard £7.99 fee upon renewal. You will receive regular exclusive Premium offers and information by e-mail. By registering you confirm that you accept the general terms and conditions. 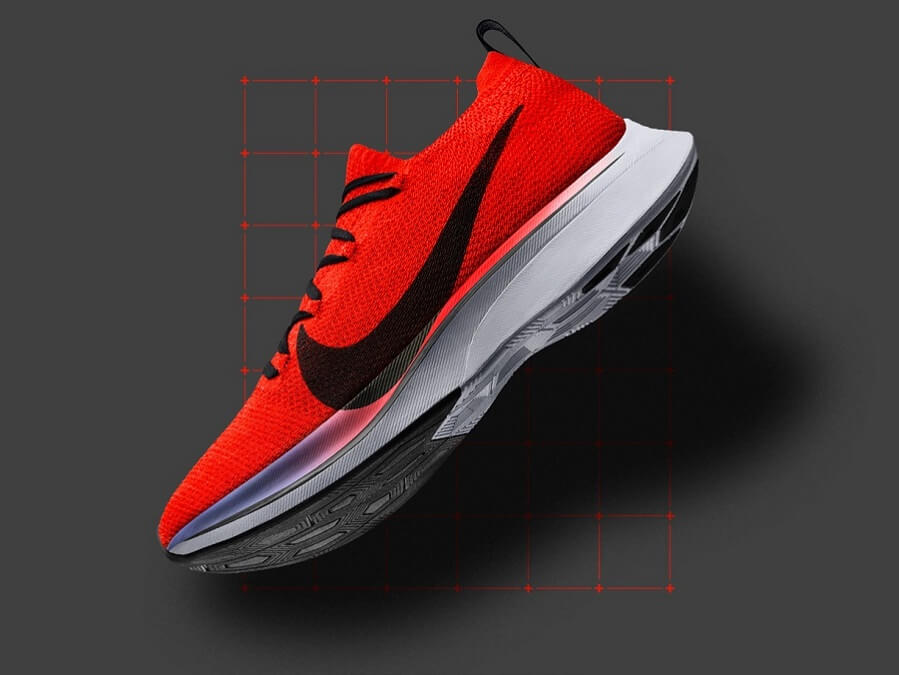 The Nike ZoomX Vaporfly 4% Flyknit are the fastest running marathon running shoes ever developed. Once again, Kenya's Eliud Kipchoge proved that. At the Berlin Marathon, he finished the Nike ZoomX Vaporfly Flyknit in an incredible time of 2:01:39 and set a new world record. We are curious when the two-hour hurdle will fall. Nike is committed to these achievements and bring out in 2019 a new colorway of the record shoe. As one of the few dealers we can offer you the Nike ZoomX Vaporfly 4% Flyknit LED. The new shoe is already colorfully reminiscent of one of its predecessors, but we really like the black details and the color gradient on the toe box. How do you see it? We get the new colorway on April 4, 2019 to our assortment. We think it's worth it to be fast because the Vaporfly 4% is not only one of the fastest, but also the most popular Nike shoe. If you did not know about the shoe yet, or would like to refresh your knowledge, we have our shoe introduction here for you. If you want to know how the Nike ZoomX Vaporfly 4% Flyknit works, check out our review of Keller Sports Pro Jan. 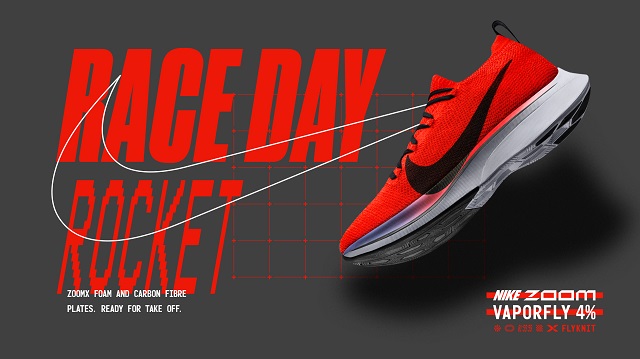 In this shoe, we see several scientific discoveries and developments working together towards the goal of "Making Runners Faster". We already know that the 2017 model had a single objective: speed. In preparation for the incredible Breaking2 event, which took place in Monza last year, our partner Nike decided to experiment with different materials and constructions. The aim was to make the fastest shoe ever for the marathon project. Born from this process was a brand new midsole material: Nike ZoomX Foam. This is significantly lighter, more reactive and more cushioned than its predecessor.

Another innovative aspect of this midsole material is that it comes with an inbuilt, full-length carbon fibre plate, which is extremely sturdy and has been moulded to the natural anatomy of the foot. This plate serves as a kind of coil spring during training runs and marathons, and it’s the reason why the Nike Vaporfly 4% Flyknit provides up to 85% energy return - incredible! A new feature of the 2018 model is its Flyknit upper. Last year’s model still used Flymesh for the upper, but with the Flyknit on the new Nike ZoomX Vaporfly 4% Flyknit, you’ll enjoy more comfort, breathability, lightness and stability than ever before. This ultra-light shoe is the perfect choice for ambitious marathon runners who want to break their limits during the next competition.

As mentioned earlier, lots of tests and scientific discoveries have gone into the design and development of the shoe. One of the lab tests consisted in comparing the marathon times of runners wearing the Vaporfly with those wearing the Nike Zoom Streak 6. Up until then, the Zoom Streak 6 had been Nike’s fastest shoe. However, the finish times achieved with the Nike Vaporfly were, on average, 4% faster than with the Streak. It’s for this reason that Nike decided to include “4%” in the name of the new Vaporfly, resulting in the full name Nike ZoomX Vaporfly 4% Flyknit.

Nike ZoomX Vaporfly 4% Flyknit - the proof is in the achievements

The Nike ZoomX Vaporfly 4% didn’t just prove to be faster during lab tests - it allowed the participants of the Nike Breaking2 event to come extremely close to breaking the 2-hour marathon record. Eliud Kipchoge succeeded in running 42.195k in Monza in just 02:00:25. The new world record wasn’t officially recognised due to the artificial conditions and all of the aids given to the runner, such as pacemakers. Nonetheless, it was an incredible achievement. Apart from the marathon event in Monza, the shoe has other successes under its belt too. In 2017 alone, runners wearing the Nike ZoomX Vaporfly 4% took up a total of 19 top 3 positions in six of the biggest races in the world. Shalane Flanagan was the first American to win the New York marathon since 1977, and she was wearing Nike ZoomX Vaporfly 4% on the day. This year, the shoe has also proven to be the fastest in the world: more than half of all Marathon Major podiums were occupied by runners wearing the Nike Vaporfly 4%. And we’re sure the best finishing time at this year’s marathon in Berlin will be achieved by a Nike ZoomX Vaporfly 4% Flyknit user. If the weather works more in his favour than last year, Eliud Kipchoge is bound to break another world record this year too. The Kenyan runner himself has described the Nike 4% system as “perfect… really perfect”.

Want to take your marathon time to a whole new level? Want to step up your training? Then you’ve done well to choose the Nike Vaporfly 4%. This is the shoe that allowed Nike and Eliud Kipchoge to come painfully close to finishing a marathon-distance run in less than two hours. Apart from impressive technologies and proven success, we think the new red design is yet another reason to like the shoe. The new Nike ZoomX Vaporfly 4% Flyknit is just begging for a good run. Fast, faster, Nike ZoomX Vaporfly 4%.
You can find the Nike ZoomX Vaporfly 4% Flyknit LED here soon »
Tags: BREAKING2, FAST, NIKE, NIKE ZOOM, RUNNING, RUNNING SHOES, STRICTLY LIMITED, VAPORFLY

J.LINDEBERG AND UVEX AT OUR KELLER SPORTS STORE

THE NEXT GENERATION OF FAST BY NIKE AT KELLER SPORTS

RUNNING SHOES WITH CARBON FIBRE PLATE - WHAT IS BEHIND THE TREND?

Welcome to Keller Sports! We wish you lots of fun shopping.

In the following, we will inform you about the gathering of personal data while using this website. Personal data are all data that can be connected to you personally, such as name, address, e-mail addresses, user behavior.

1. Liable Entity for Data Processing and Point of Contact

pursuant to Art. 17 GDPR the right to demand deletion of your personal data saved by us, insofar as their processing is not needed to fulfill a legal obligation or to assert, practice, or defend legal claims;

pursuant to Art. 7 para. 3 GDPR the right to at any moment withdraw your previously given consent for data processing from us. This will have as a consequence that henceforth we are no longer allowed to continue processing data based on that consent. The legality of any consent-based processing that took place before the withdrawal of the affected person remains unaffected;

pursuant to Art. 20 GDPR the right to receive your personal data provided to us in a structured, common, and machine-readable format or to request having it sent to a third person in charge;

pursuant to Art. 77 GDPR the right to complain to the responsible data protection supervisory authority if you are of the opinion that by processing the personal data gathered over the course of you visiting our website we violated your right of informal self-determination. KELLER Group GmbH is under the authority of the bayerisches Landesamt für Datenschutzaufsicht (Bavarian State Office for Data Protection Supervision);

in case your personal data gets processed based on legitimate interests pursuant to Art. 6 para. 1 s. 1 lit. f GDPR, the right to pursuant to Art. 21 GDPR appeal the processing of your personal data, insofar as that is justified by the existence of reasons resulting from your special situation or if the appeal is directed against direct advertising. In the latter case, you have a general right of appeal that we will put into effect without special circumstances claimed.

We put up-to-date technical measures in place in order to ensure data security, especially in order to protect your personal data from risks during data transfer as well as from third parties accessing them. These receive updates to meet the respective current state of the art.

1. When using the website for solely informational purposes, meaning if you do not register or share information with us in another way, we only gather personal data transmitted by your browser to our server. If you wish to see our website, we gather the following data necessary for technical reasons in order to display the website and ensure its stability and security (legal basis is Art. 6 para. 1 s. 1 lit. f GDPR)

date and time of request

browser operating system and its interface

language and version of browser software

2. In addition to the previously stated data, cookies will be saved on your computer as you use our website. Cookies are tiny text files that are saved on your hard drive and assigned to your browser. They transmit certain information to the site that placed the cookie (in this case that will be us). Cookies cannot run any programs nor bring viruses to your computer. They serve the purpose of making internet services in general more user-friendly and effective.

You are free to configure your browser settings according to your wishes. However, please note that you might then find yourself unable to use all of this website’s features.

Apart from a solely informational usage of our website, we offer various services for you to use if interested. For those, you will usually have to share further personal data we will then use to provide the respective service.

Follow your orders, manage your personal details, set up an address book and much more - create your customer account now.

Already registered? To the login page

Enter the e-mail address with which you created your customer account. We'll e-mail you a new password.

We've sent an email to:

Thank you for registering. You can now sign in to your customer account using this email address: . Have fun shopping!

We have sent you a new password to your email address. Please check your mailbox.